I recently finished reading Mastering the Lighning Network (Amazon link, Github link). This book does a great job explaining the design of the Lightning Network and the details of the protocol. I had a few “Aha!” moments while reading it and I’d like to share them with you!

To get the most out of this note, no prior knowledge about the Lightning Network is required, but a basic understanding of Bitcoin’s UTXO model and scripting capability is.

The Bitcoin network is famously “A Peer-to-Peer Electronic Cash System” (this is in the title of the Bitcoin whitepaper!). However, participants are split in practice: 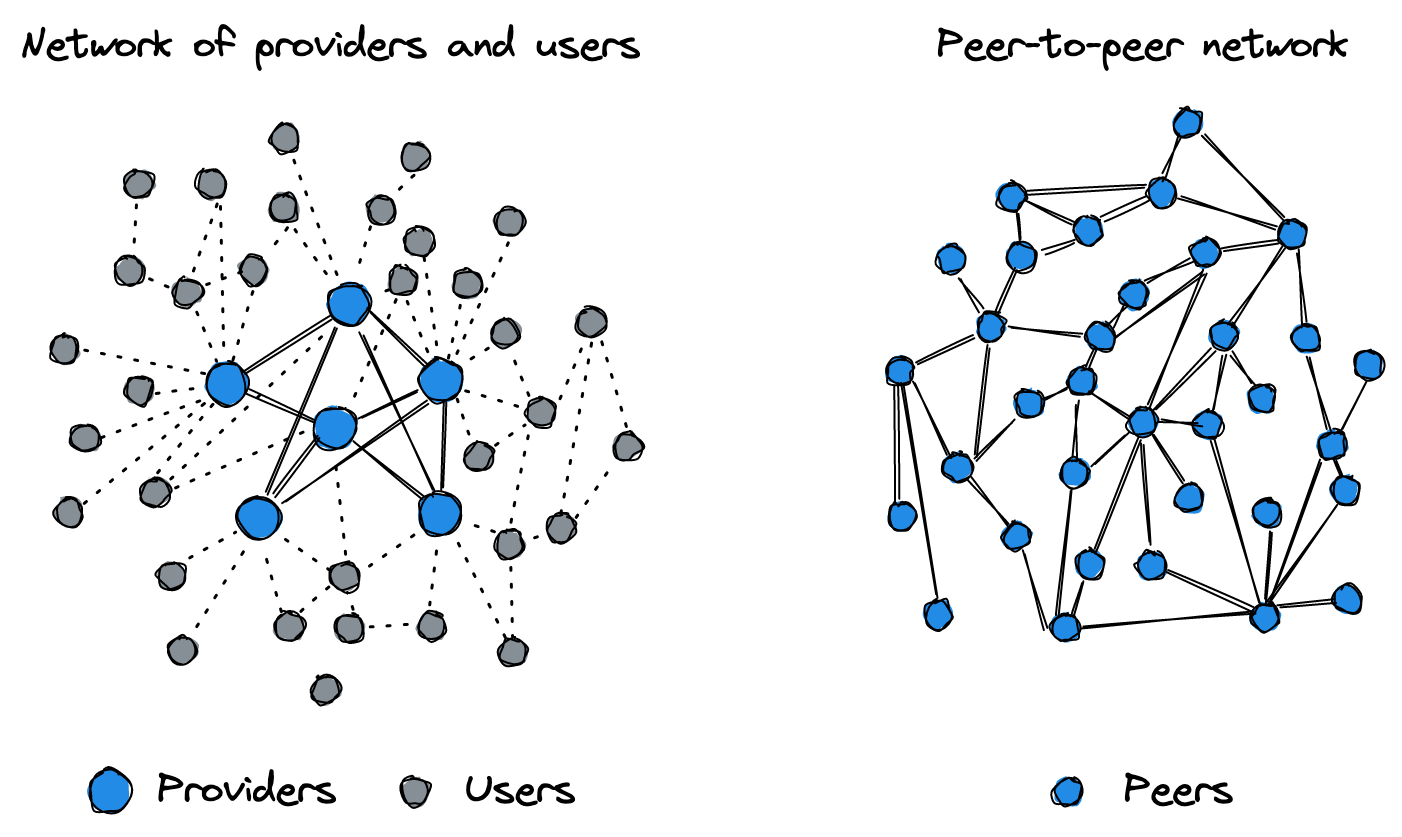 The Lightning Network, however, is only composed of peer-to-peer relationships called channels. Channels are the pathways of the network, through which payments travel. All participants must open at least one channel to another participant to send and receive payments. The network is a big, amorphous graph of participants connected to each other with channels, all on the same level.

Aha! Transfers are “lightning” fast because…there are no transfers!

Surprise: the protocol outlined in the Lightning Network standards (“BOLTS”) does not define value transfer. At its core, the Lightning Network is a protocol for two participants to pool funds together and make commitments to splitting this fund pool. This split evolves over time, enabling “transfers”. For example, say I want to send you 0.5 BTC through a channel you and I have opened. At the moment there is 1 BTC on my side and 2 BTC on yours. If we both agree to split 0.5 BTC / 2.5 BTC instead of currently 1 BTC / 2 BTC, the transfer is done!

It’s easy to understand why these kinds of transfers are wicked fast: they’re not actually happening. Only commitments are exchanged between participants.

Aha! Funds are pooled via multisig, with pre-signed transactions as insurance!

You’re probably wondering how commitments actually work. It seems magic. Participants cannot trust each other, making this a hard problem. The Lightning Network solves this by pooling funds through multisig, and committing with pre-signed Bitcoin transactions.

Pooling. Pooling funds is done through a Bitcoin primitive you probably know already: multisig. Opening a Lightning channel is equivalent to funding a “2-out-of-2” multisig address. If you and I deposit funds into a 2-out-of-2 address, neither of us can unilateraly move these funds. That’s good but: how can I get my money back if you lose your key or go offline? What if you never agree to sign a transaction even when I’m just taking my fair share? This is where pre-signed Bitcoin transactions (also called “commitment transactions”) come in.

How are commitments put in place? Well, here are the messages exchanged to open a Lightning channel:

When a channel is open, 100% of the funds are allocated to the channel opener. To update the channel balance old commitments are revoked, and a new one established.

SegWit solves the transaction malleability problem. Before SegWit signatures (aka “witnesses”) were part of the data hashed to produce transaction identifiers. This meant that the transaction hash (or ID) could change if the signature bytes changed. Given signatures aren’t deterministic (signers can pick different nonces, observers can also flip the “s” value or play with DER encoding to get the same signature encoded with different bytes), it was not safe to expect that a signed, off-chain transaction would keep its ID. The only safe way to get a reliable transaction ID was to broadcast it on-chain. As a result chaining signed transactions without broadcasting them was risky.

SegWit solves this by excluding (or, segregating) signatures (or, witnesses) from the data hashed to produce a transaction ID. As a result, a change in the signature won’t change the transaction ID. This is why it’s safe to rely on this ID to construct another transaction using it, even if it’s not broadcast on-chain.

To update the channel balances, old commitments need to be revoked and a new one established. This is done with a simple exchange of messages:

Commitment transactions are sophisticated, to prevent cheating. The idea is that if I cheat by broadcasting an old commitment, you should have some time to react and punish me. In practice this is implemented with revocation secrets: when revealed they let the other party redeem a “punishment” output, taking the other party’s share. That’s the financial incentive not to broadcast old commitments.

To allow for cheating detection and enforcement, commitments output are delayed so that the party crafting them is forced to wait for a window of time to get their fair share. This is to ensure the other party has time to detect cheating and use their revocation secret if they so choose. The time delay is not dictated by the protocol: it is agreed upon when the channel is open (to_self_delay in open_channel)

To illustrate this, let’s take a concrete example. If A and B have a channel opened (split with 0.5 BTC for A, and 2.5 BTC for B), here are the commitment transactions on each side:

There you have it, game theory and Bitcoin primitives coming together in this commitment transaction output!

Now let’s dive one layer deeper: how do revocation secrets work exactly? Remember that revocation secrets are powerful, you can claim my portion of the channel balance with it! How are they generated and how do they “revoke” commitments exactly?

Aha! Revoking a commitment is done by revealing a secret!

Revocation secret derivation is explained precisely in BOLT#3. However the technical nature of the spec masks the cleverness of its design. Let’s walk through it together!

Warning: this requires some knowledge of elliptic curve cryptography.

If two parties (let’s call them “A” and “B”) open a channel, they exchange two (public) elliptic curve points as part of the flow: revocation_basepoint and per_commitment_point. Revocation public keys (revocation_pubkey) are composed from these two points:

To make the shared point deterministic, the Lightning Network picks x and y based on values known to both parties:

(In the above, || represents byte concatenation and * is ECC point multiplication)

The associated private key is given by:

To convince yourself that this works, multiply the above expression by G and you’ll find that revocation_privkey * G results in revocation_pubkey.

revocation_pubkey can be computed by anyone since it’s composed of 2 public points. The interesting piece is the revocation_privkey, composed of two secrets spread across channel partners: revocation_secret and per_commitment_secret.

It turns out “revoking” a commitment is the act of revealing its per-commitment secret. The reveal is done with a field named per_commitment_secret in the revoke_and_ack message. This message also contains next_per_commitment_point such that the other party can compute the next revocation_pubkey and use it to craft the next commitment transaction. To make this more concrete, let’s illustrate this with our 2 channel partners, A and B:

Note: the above only describes how A creates commitments for B. When B wants to create commitments for A, it uses its own revocation_basepoint and A's series of per_commitment_point values.

Now it should be clear why commitment transactions never change, yet they’re “revoked”: when the per_commitment_secret for a given commitment is revealed, the other party can suddently compute the associated revocation_privkey and redeem the commitment’s “punishment” output if it was ever broadcast on-chain. This strong financial incentive is enough to keep old commitment transactions offline for good.

Yes it can! Provided that there is a route with enough capacity from A to C, not only can A pay C, it can do so atomically. Either all legs of the payment (e.g. A->B, B->C) succeed, or all legs fail. This is possible at scale, even with 10, 15, or 20+ intermediary nodes. If you’re used to the traditional financial system where intermediaries cause hard-to-debug failures and long settlement delays…isn’t this mind-blowing?

The Lightning Network does this with Hash-Time-Lock-Contracts (“HTLCs”). These contracts are “just” valid Bitcoin scripts. The basic premise is that an HTLC is a contract between 2 parties (1 issuer, 1 recipient), and it enforces the following:

How are HTLCs helping with instant, atomic payments? Here’s how a payment from A to B to C happens in practice:
(note: if you’re wondering why “B” was picked as an intermediary, we’ll see later that path discovery isn’t explicitly part of the BOLT specs! Another interesting aspect of the Lightning Network design)

To redeem the HTLC, C can broadcast a transaction containing a valid pre-image. Doing this will reveal the previously secret pre-image because it’s publicly on-chain! The public reveal of the pre-image makes all HTLCs spendable by their recipients. In our example, B can now unlock the HTLC offered by A and redeem 101,000 satoshis.

This is how atomic payments are enabled: regardless of the number of intermediaries, either all HTLCs become spendable when the pre-image is publicly revealed, or none of them do.

In practice broadcasting on the Bitcoin network isn’t efficient because it incurs fees. Instead, C can send the pre-image to B, thereby prooving it could redeem the HTLC if it wanted (by going on-chain). This is enough for B to get confortable and update the (B,C) channel balance, sending 100,000 satoshis to C.

Once B has updated the (B,C) channel balance, B can send the pre-image to A. For the same reason, A prefers to settle the HTLC off-chain and send 101,000 satoshis to B through the (A,B) channel.

I’ve never connected Schnorr signatures with the Lightnint Network before. The relationship is that Schnorr signatures unlock Point Time-Locked Contracts (PTLCs). PTLCs are “Bitcoin scripts that allows a conditional spend either on the presentation of a secret or after a certain blockheight has passed, similar to an HTLC. Unlike HTLCs, PTLCs do not depend on a preimage of a hash function but rather on the private key from an elliptic curve point. The security assumption is thus based on the discrete logarithm. PTLCs are not yet implemented on the Lightning Network” (taken from the Mastering the Lightning Network’s glossary)

Designing is making choices. It’s also choosing NOT to make a choice, to leave room for experimentation and innovation within the protocol boundary.

I was a bit shocked to learn that there is no standard on how to route payments in lightning. The probing for channel balances happens independently, through trial and error. Some papers have been written on how to do this independently. There’s also, in the same category, innovation on how to manage channel liquidity. For example: Loop.

This is how lightning “scales”. The protocol itself doesn’t mandate anything, actors within the lightning community are coming up with bottom-up solutions like these, getting better and better over time.

Then I realized: opening payment channels, evolving commitments, and closing channels can all be done by exchanging messages on USB drives or paper, fully offline. These messages do not have to follow BOLT standards as long as the structure of the commitment transactions is kept intact (validity of transactions on-chain is key to enforcing incentives and preventing cheating).

Nothing mandates a “network” for pure peer-to-peer payment to work. The design is extremely resilient: no privileged node assumption (all nodes are participants, all participants are nodes!), no speed or hard protocol requirement for message exchange, and no trust assumptions even for direct peers. Thanks to cryptography and game theory the only real assumption in the Lightning Network is reliable access to the Bitcoin Network, to detect and punish cheaters.

This makes the design of the Lightning Network applicable broadly:

If you’ve made it this far, thank you for reading. We’ve covered quite a lot of ground and have seen that:

I highly recommend reading the full version of Mastering the Lighning Network (Amazon link, Github link) if you’re looking to learn more about the Lightning Network. The design principles behind it are worth dissecting. I hope you’ll get as much satisfaction as I did while diving in!

Thanks to Rob S. and Alex M. for their valuable feedback on previous versions of this text.